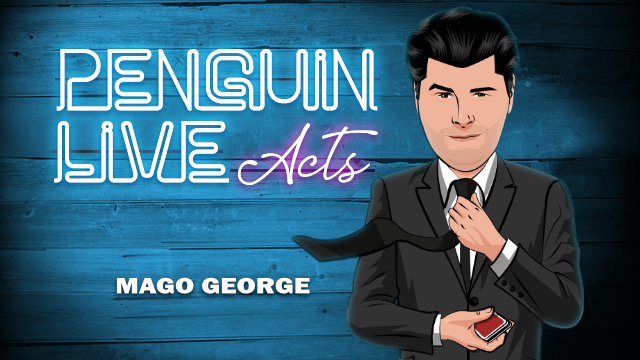 “George will teach you very practical and powerful techniques to improve your performance.” Jeff McBride

“George Iglesias has some very clever ideas. I get to see him once every year at various magic events. It is always a pleasure to see what he has being working on each time. Do yourself a favor and watch his lecture. I know I will!” Kevin James

“George Iglesias is a very unique and innovative performer, I love his creations in magic.” Dirk Losander

“Fresh and cool ideas, always innovating, thinking in how to create new effects and how to fool layman and magicians. From all his great ideas, I am sure you will try more than one, watch George’s Penguin Live and get ready to be surprised.” Shoot Ogawa

Food to Go- Show a food menu on both sides, ask a spectator to help you and select anything from the menu, now magically make a hamburger and fries appear from the menu, then reveal that the drawing of the burger and fries has vanish! A powerful, magical and strong opening routine that will leave your audience amazed and anxious to see more!

Burn Jacket- A classic of magic presented in a very fun and entertaining way. Borrow a jacket from the audience and place a lighted cigarette inside of it! Lots of smoke coming out of the jacket just to see that it was all, an optical illusion!

Six Card Repeat- A true story turns a simple trick into a powerful piece of magic for the audience! George tell us a true story from his life with his grandmother Julita in New York city watching a performance in Central Park, the great Jeff Sheridan this classic, a magician whom after 16 years could meet in person. The cards appear on the tips of his fingers over and over again.

Chicken or Pasta?- An imaginary trip to an unknown destination! One spectator will be part of a unique travel experience sitting in a chair, he will imagine the perfect flight and destination, while he is being served by the magician playing the role of the flight attendant. George will try to guess many things the passenger is thinking including his flight final destination. A unique routine of multiple outs, full of details, gags, nice wording and double reality that promises to catch your audience attention!

A Trip to Cancun- A hilarious comedy routine, inspired by the great magician David Copperfield and the classic Abbotts Bathing Beauty, reinvented by George, this time using a signed card and having the spectator taking away many cloth pieces from a girl in a poster to get a final surprise!

Jorge Larrabure AKA (El Mago George Iglesias) is a Peruvian illusionist of international fame with more than 20 years of experience and a successful career in Peru and abroad. His experience as a professional illusionist led him to work abroad for 7 years, being hired as the Official Wizard of the UNIVERSAL STUDIOS Amusement Park Orlando.

George is a personality of the Latin American television, being considered at the moment the wizard and magician with greater international trajectory having appeared in more than one thousand opportunities in national and international television including presentations for CNN, ABC, TELEMUNDO, DISCOVERY CHANNEL, FRANCE 4, CNN, ANTENA THREE of Spain, UNIVISION, CARIBBEAN VISION, FUJI TV, MEGA TV among many other important channels.

He recently published his first book #ElMagoSoyYO, the first book of magic in Peru, with the prestigious Grupo Planeta de España in which he encourages the teaching of magic to children and adults nationwide. The prologue of his book was written by the famous illusionist David Copperfield for whom George has had the honor of working with in recent years.

From 2008 to 2012, George was part of the cast of the television program “NITIDO” that transmits the TELEMUNDO International chain, being the conductor of his own segment of magic called “Magic Clear” which could be appreciated by millions of people in all USA, Puerto Rico and Central America for more than 4 years.

He is the winner of multiple international awards for his talent and creativity and, today, responsible for the invention of dozens of magical effects for professional wizards in the world including the names of David Copperfield, Penn & Teller, Ciryl Takayama, Lu Chen and Dynamo.

In 2014, George married the Miss Peru Universe 2010 and Miss Peru World 2012, Giuliana Zevallos Roncagliolo, with whom he has a beautiful son, Fabrizio.

Twister Magic Studio is the name of its School of Magic which was founded in Peru in March 2001, and has positioned itself as the first and only School and Store of Magic in Peru. Twister Magic Studio is located in the district of Miraflores, Lima-Peru, and is a school that trains amateurs and professionals in the art of magic. The class programs developed by George have crossed borders, currently forming part of the NOVA SOUTHEASTERN UNIVERSITY University in Florida-USA, LE CORDON BLEU PARIS Peru Headquarters, Interbank UCIK Corporate University and MIAMI MUSEUM OF SCIENCE in Miami.