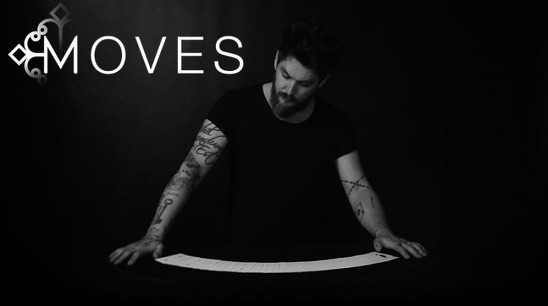 Moves is a collection of 26 sleight-of-hand techniques with a deck of playing cards, taken directly from my personal arsenal of those that I love the most.

The thing I love about the general art of deceptive practices, is the execution of ‘Moves’ – particularly difficult and unusual ones.

This obsession has lead me to discover, create and develop techniques that apply to the rules of deception and magic by appearing invisible to the witness, but then also applying to what I love by appearing and feeling beautiful when executed… these are moves that are as much a pleasure to execute in practice as they are to achieve within close-up deceptions for onlookers.

In MOVES, I have encapsulated that which I consider to be my art – techniques that are as amazing when exposed and practiced as they are in performance.

These are my favourite sleight’s, techniques and moves, and I gave each and every idea the justice on film which I believe they deserve in practice. In over an hour and a half of intricate explanations with minute detail; exposing and exploring the depths of the psychology, thought and and theory that goes into the discovery, creation and development of each technique, I have left no stone unturned.
Join me now at the card table for in in-depth look of my most beloved sleight-of-hand techniques…

I am Daniel Madison…These are MOVES.

– Chris Ramsay0:33 Drop Concept.
Most all of MOVES revolves around this concept, the concept that became an obsession that would inspired some of the best ideas in this project and by far my most proud discovery in sleight-of-hand techniques.
The Drop Concept allows you to Palm a card into Gamblers Cop without the taking hand ever having to make contact with the deck.

15:30 One Drop Cop
Utilizing the Drop Concept, this idea allows you to switch one card for another whilst apparently only ever holding one playing card.

19:29 Hidden Drop Switch.
This idea allows you to switch one card for another whilst apparently only ever holding two playing cards.

23:50 Drop Switch 1.
A deviously deceptive card switch which allows a single card to be switched for another in the openly fairest fashion.

26:26 Drop Change
A highly-visual color-change that happens in an instant, in an open palm.

28:52 Drop Switch 2
This switch offers an alternative handling for the Drop Switch 1, offering a new twist on the original concept.

32:10 Drop One V2.
This is a single card switch that allows you to be seen, only ever freely handling one playing card.

34:18 Drop One V1.
An alternative single card switch to Drop One V2 that allows you to secretly switch one playing card for another.

36:15 Invisible Palm.
With this idea, you are able to make a single card cleanly vanish from an exposed Classic Palm.

39:34 Double Drop Change.
Not unlike the Hidden Drop Switch, this idea allows you to switch one card for another whilst apparently only ever holding two playing cards. As the switch takes place, the second card secretly helps you hide your deception.

44:11 Slip Switch.
This is a beautifully illogical idea that shouldn’t work, but does! This idea allows you to switch two surfaced playing cards without touching them.

48:11 Head Vanish.
A method for causing a card to visually or secretly vanish from the top of the deck whilst the deck is held in only one hand.

48:11 Head Change.
Like the Head vanish, this technique allows you to visually change the top card of the deck whilst the deck is held in only one hand.

51:55 Tenkai Steal.
With apparently no movement at all, this technique allows you to steal the bottom card of the deck into a Tenkai Palm.

54:12 Pressure Shift.
This is a development of the Squeeze Shift. A technique that allows you to shift a playing card to the bottom of the deck whilst apparently losing it in the middle of the deck.

54:12 Pressure Top.
This development of the Pressure Shift allows you to shift a playing card to the top of the deck whilst apparently losing it in the middle of the deck.

54:12 Pressure Cop.
This is another development of the Pressure Shift that allows you to shift a playing card directly into a Gamblers Cop whilst apparently losing it in the middle of the deck.

1:00:00 Blackout Shift 1.
This techniques allows you to secretly cut / shift the deck whilst apparently inspecting the edges.

“Moves is a hell of a project!”

1:00:00 Blackout Shift 2.
A development of Blackout Shift 1 that allows you to secretly cut / shift the deck whilst apparently squaring it up on the table.

1:09:50 Top Cop.
The Top Cop allows you to secretly reposition the top card into a Gamblers Cop using only one hand. This idea was initially published in the Mechanic DVD but has been widely developed into a much more deceptive technique,

1:09:50 Middle Cop.
This technique allows you to secretly reposition a card from in the middle of the deck into a Gamblers Cop using only one hand.

1:09:50 Any Cop.
A conceptual development of the Top Cop and Middle Cop that allows you to secretly reposition any card from any position in the deck into a Gamblers Cop using only one hand. This offers an incredible weapon for those who work with stacked decks.

1:21:56 Wheel Change.
An old color-change that I teach in order to demonstrate the concept for the Flat Change.

1:21:56 Flat Change.
A slow-rolling color-change of a card protruding the deck. You slowly and simply stroke your finger over the index of the card and it is seen to instantly change.

“Moves is amazing! Period. Get it, learn it.”

– Dr Todd Cooper (Ellusionist Black Club Member)
1:26:16 Hotel Cop.
This is a technique that allows you to reposition the bottom card of the deck into a Gamblers Cop using only one hand whilst holding the deck in an Upper Mechanics grip.

1:30:39 F Change.
This is a bold and brave color-change that happens in the open whilst apparently holding only one playing card.