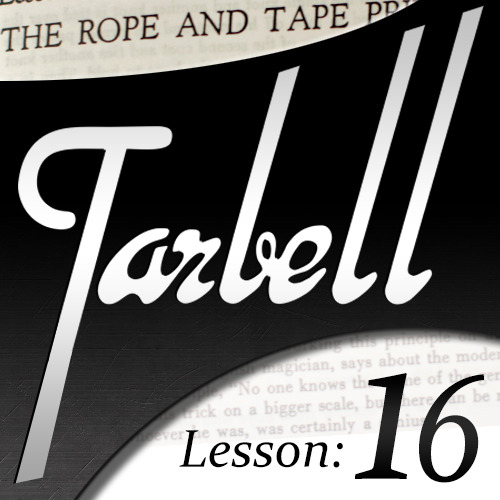 The rope and tape principle discussed in this lesson is one of the oldest, and best, in the realm of magic and can be applied to a variety of items.

It first appeared in the English language in The Discovery of Witchcraft in 1584, where Reginald Scott wrote about it as though it was in common use for some time.
Most likely, it’s a principle which was handed down from ancient magicians to their apprentices for centuries before being written down.

A modern, close-up version is known as “Grandmother’s Necklace,” and when worked on a much bigger scale, it is incredible, visual and entertaining magic.

Dan will start off big with a presentation involving car keys, two jackets, and a pair of chairs. If you can release the ropes, you’re free to go.

Then, Dan goes even bigger by creating an opening, costume-change, escape illusion using his own quick release method.

And, if you’ve been with us for the last couple of lessons, Dan finally gets to show you how to prepare the strings to release that puzzling orange.

You’ll also learn a really cool version that allows you to make a quick escape from two unprepared ropes tied around you and threaded through your jacket.

And, finally, Dan got one of his spectators directly involved in his questionable activities as they performed a party stunt that’s bound to please.

So, if you’re ready to explore the versatility of The Rope and Tape Princple, this lesson contains some strange possibilities and weird variations.

Tricks included:
– Coats, Tapes, and Rings
– Coats, Ropes and Rings
– The Prisoner’s Escape or Hanging Oneself with Ropes
– The Magic Orange
– Walking Through Tapes
– Another Tapes Release