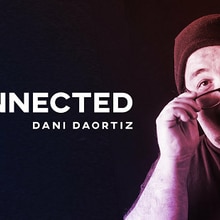 Here’s something as timely as it is fascinating: Dani DaOrtiz has designed an entire collection of card material…for Zoom performances! In these unusual times, we need hard-hitting material that can be done by video-conferencing remotely, and this material represents the very finest efforts of the master, Dani DaOrtiz. These are tricks that work great live, with people following along with their own cards. But they work EVEN BETTER remotely. You’ll see that these are not mere mathematical puzzles, but performance pieces with in-built humor and subtlety. They’re so deceptive that you’ll fool yourself as you do them. And since the magic is remote…they’re entirely self-working. In all, you receive six effects in this download, each one performed and then explained for a “live” remote audience.

Oil and Water (in the Spectators Hand) – This routine is SENSATIONAL and just as described. Despite being in different locations, you perform an ENTIRELY deceptive separation of the colors. Yours separate as do the spectator’s cards.

Ritual Zoom – Despite choosing a card and a number and going through an extremely fair mixing procedure, Dani locates the spectator’s card at their chosen number. The emphasis here is on the total freedom given during the mixing procedure.

Any Card Spelled – You can do this for any number of spectators in a zoom chat. They look at you onscreen as you spread through a deck of cards and think of one. One spectator is nominated and he or she MENTALLY spells their card as you deal through the cards one by one. The thought-of card ends up at the spelled position.

Mirror Ambitious – In this effect a spectator selects a card and mixes it into his own deck in the FAIREST POSSIBLE MANNER. Still, the spectator’s card rises to the top.

Interactive Chaotic Coincidence – This is another trick designed to be performed for several spectators over zoom. Everyone follows along with a small packet and finds their own card, based on increasingly zany directions and choices.

Business Zoom Cards – This is one of Dani’s most unusual creations. A card selected and lost into a spectator’s pack. Dani removes a stack of business cards and each one has a message on the back that eventually leads the spectator their own card. Wow!