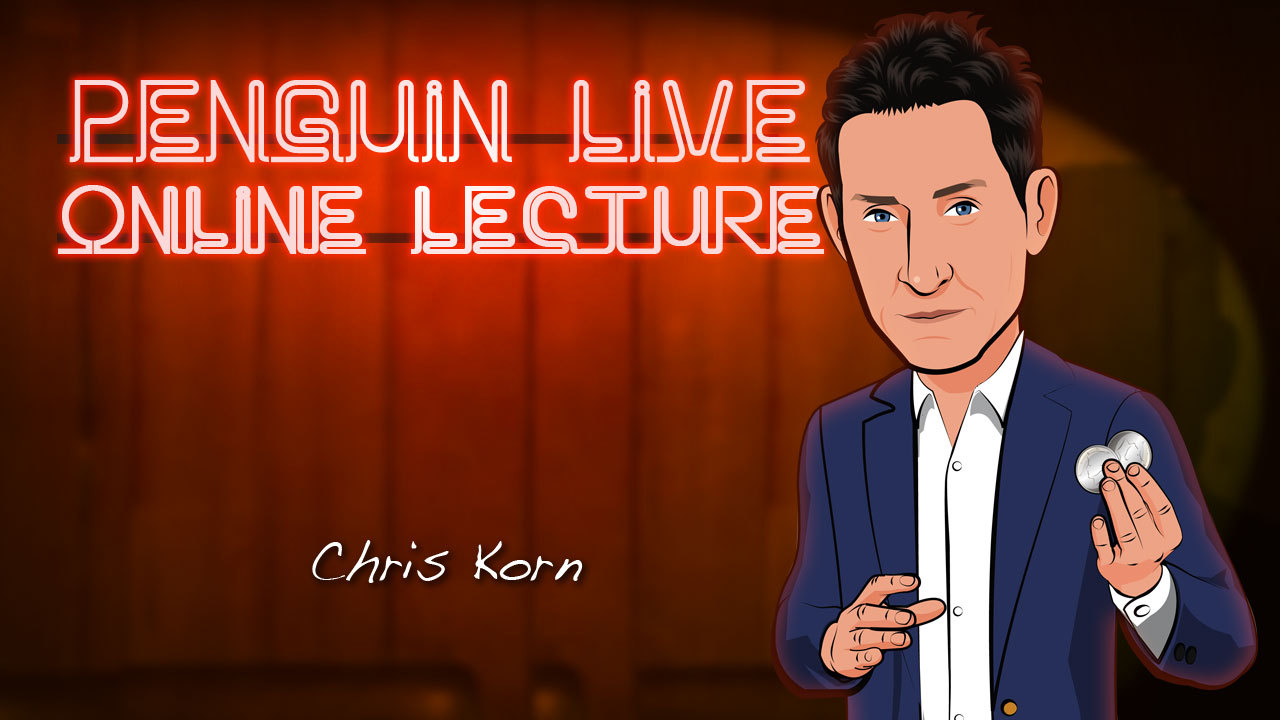 “Chris Korn’s new lecture is a true master class of process, detail and being mindful of the audience. His experience performing these routines thousands of times for people of all ages and cultures really shines. So many cool ideas and great bits through to the very end. Honored to have known Chris for over 3 decades and proud to call him a great friend.” –Homer Liwag

“Chris Korn has been inspiring magicians with his unique style of magic for decades. This latest offering is no different. His 10 coin production is worth the price of the lecture.” -Eric Jones

“I’ve seen Korn melt brains (including mine) with this material in real life. Pound for pound one of the best close up magic lectures I’ve seen in a LONG time. Just buy the damn thing. If you

don’t find at least one thing to add to your working set immediately, then you probably think Nickelback is “music”. -Nick Diffatte

“If you never saw Chris perform that’s because he was too busy performing his magic abroad….now you can see his most prized material that made him travel around the globe” -JB Dumas

“One Jack Off… SEXY! That’s doesn’t sound right… but it is! Commercial, Strong, Practical magic! You can’t expect anything less from Korn!” – Daniel Garcia

“You can’t trust anything I say about Chris Korn. He’s my friend, my brother and one of my most talented and trusted friends in magic. Trouble is, almost anyone you’ve ever (or never) heard of in magic could say the same. He’s awesome. His material is awesome. It’s just shame the poor guy hit every branch when he fell out of the ugly tree.” – Paul Wilson

“Speaking as one of the coin guys who has been nagging Chris for years to release ‘One to the Tenth Power’, I can tell you that this lecture is worth twice whatever they’re asking for. If all that comes out of this quarantine lockdown is Chris Korn 2, it will have been worth it.” – Curtis Kam

“Chris Korn’s dedication to the art and balls to actually perform them for real people is a rare thing. Learn as much as you can from this man. Chris is one of a few that has walked the walk.” – Tony Chang

“I’ve seen Chris Korn perform and lecture many times over the years and his creativity and incredible skill blows me away. Chris thinks about all the details and devises strong, commercial routines that are real workers. You are in for a treat.” – Chad Long

“When it comes to coin magic Chris Korn is a true legend! I can’t believe he is finally giving away this stunning routine after keeping it secret for the past twenty years.” – Tobias Dostal

“Chris Korn makes my eyes hurt from amazement. Seriously one of the craziest skilled funniest dudes I have ever seen perform in my life.” – Blake Vogt

“There is good and then there’s really good. Chris Korn is the latter; a master of cards, coins, wit and psychology. Korn is one of the few all-around wonder workers. I’m so looking forward to this!” – Paul Vigil

“Chris Korn is one of my all time favorite magicians! I’ve been using his material as a secret weapon for years.” – Mike Pisciotta

“Chris, you are tipping your work on the Jacks routine in your lecture??? For that I both love you and hate you!” – David Regal

“Chris Korn is one of my favorite magicians to watch. In this Penguin lecture he is tipping his “A” material—the exact set I’ve seen him perform for audiences all over the world for more than 20 years. This is the magic that has made his reputation, earned his living, and that I have applauded countless times. Truly commercial, audience tested material from one of the best.” -Eric Mead

“Chris Korn is an enigma to the human race. It’s not just his mastery of coin and card magic that swirls the curiosity; any interaction with Korn will leave your head spinning. His off the wall humor is rooted in quick wit, but more importantly, exhibits a keen eye for his surroundings. Settings register deep social codes for Korn, making him perfect for any audience from the Queen of England to Joe-Bob of the Swamp. His modest beginnings taught him to keep one eye over his shoulder, two in the back of his head and one peering deep into your soul. He reads strangers like a book, verbalizes their deepest insecurities, and all while secretly slips their watch off their wrist. If I had a dollar for every encounter with Chris Korn that left me wondering what the hell had just happened… well it wouldn’t matter anyway, Chris Korn would have pick-pocketed my every dollar, pulled them from behind my ear and then bought me a drink with them.” – Cassie Kohler, Riverfront Times

Kennedy Said So- Chris’s handling of the translocation plot where coins vanish from one side of the table and reappear on the other.

A Time For Outs- A Triumph style routine where a number between one and five is called for. The magician leads the audience down the garden path shuffling face up into face down with some very convincing displays, before finally restoring the deck to face all the same way except for the four of a kind that matches the number called for.

One Jack Off- A production of an apparently called for four of a kind, followed by a transposition effect where a selected card vanishes from between the four of a kind only to jump into the spectator’s pocket and then again change places with the four of a kind. This is deceptive impactful card magic.

Tell Me I’m Wrong- Korn’s approach to the classic two card transposition where the audience tells you where the cards should be only for them to trade places.

One to the Tenth Power- A masterpiece coin flurry that top pros have been calling on him to release for years. This gimmick free, pure sleight of hand routines is a knuckle buster, but you’ll learn everything that makes this what the best coin workers in the business have been wanting to learn. One coin is introduced, and vanished and reappears at the performer’s will. It jumps from elbow to elbow, visually vanishes from one hand only to appear in another. Suddenly the magician splits the coin, then produces another and then four… five, six, seven, eight, nine, ten coins in rapid succession before every single coin vanished in an instant. It’s a masterpiece and Korn is finally tipping all of the work.

Beginnings, Middles and Ends-  These are the tips and touches that can be added to existing tricks. These are practical ways to make your routines or tricks more powerful.
Chris teaches how to steal and load stacks of coins off a table right under the audience’s nose. Also, a super clean backfire sequence that plays with sound in ways you’ll use to kill your audiences.
Back to the cards for a moment where you’ll learn one of the most powerful applications of the Rub a Dub vanish where the card vanished from underneath your spectators hand.

Finally Chris teaches something he’s held onto for twenty years: it’s his method for making your audiences actually feel an object appearing inside their hand.

Globally renowned, Chris Korn has captivated audiences in over 20 foreign countries – from Japan to South Africa – and in over 100 cities in the United States, showcasing his extensive repertoire of ecstatic illusion.

Since starring in his own series, MONDO MAGIC, on A&E, MONDO MAGIC SINGAPORE, & MAGIC ASIA on AXN (the #1 TV show throughout Asia and Singapore), Chris Korn has come to be known by the show’s 74 million viewers, as not only one of the most talented sleight-of-hand magicians in the world, but as an amazing over all entertainer.

Brad Pitt, Angelina Jolie, JJ Abrams, Jon Cusack, Alicia Silverstone, Brook Shields, Alec Baldwin, Adam Sandler, and Jeremy Piven are just a few, among many celebrities, who can claim Chris Korn to be the one illusionist they will never forget.