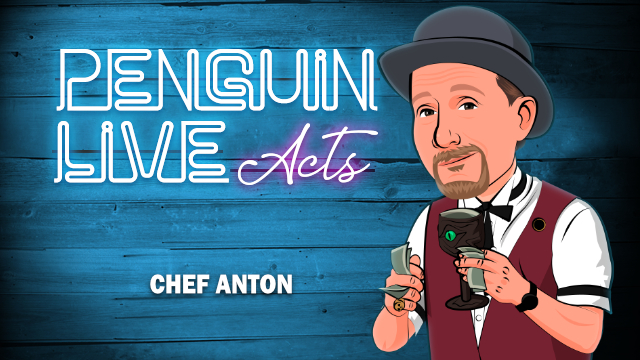 “Chef is an incredible performer and one of the best minds in magic. He must have had an amazing teacher.”- Pop Haydn

“Chef Anton has taken the Shell Game to an entirely new level. I wish I thought of his ending.”- Mike Hammer

“Beautiful routine you rat bastard. Chef we will never bet against you ever again.”- Penn & Teller

King of the Con- A signed is card marked with a King of the Con ID Tag and magically changes under the most impossible conditions.

Con Man Code- A deck is shuffled and half dozen cards selected. Using the “Con Man Code” the performer is able to identify which cards have been removed.

Mugged by a Luchador- A twist on Rich Marotta’s classic effect where a magician is robbed only to have his belongings instantly reappear.

Card on Forehead- You have never seen this classic effect performed this way before.

Balls Over Head- Again, solving all of the problems with balls over head effect, this is a reputation maker.

Chef Anton is known world-wide for his unique character development and ability to seamlessly blend magic, comedy, and con games. On stage, Chef Anton combines wit, humor, and audience participation with unbelievable sleight-of-hand and daring pick pocketing to weave a spell of enchantment and deception for all.
The audience sees the world through the eyes of a con man. Onlookers become his confederates, as they put the sting on an unsuspecting spectator. As the con unfolds, the audience, the on-stage volunteers, and Chef are caught up in a mystifying web of comedy and trickery with a climax that has to be seen to be believed.